Responding to the Global Hunger Crisis

Posted on 05/24/2017 Posted By: bandonpresCategories: Ponderings

With changes and challenges in our own lives and all the turmoil in our own country, it’s easy to become overwhelmed and to develop a sort of tunnel vision about the problems of others whose experience is foreign to us. Yet as followers of Christ, we are commanded to see all humans as created in the image of God and beloved of the Creator, and to feed and clothe others as if we were responding to Christ himself. We cannot in good faith turn our faces from millions in need. So here are a few basic facts about drought, famine, malnutrition and hunger in Africa (provided primarily by Kathryn Reid, in the World Vision US office).

What’s the current situation with the hunger crisis?

Millions of people are experiencing unprecedented hunger and famine. A combination of conflict, recurring severe drought and high food prices are to blame. For about 100,000 people in South Sudan, it’s so bad the United Nations officially declared famine. Large areas of Somalia, Nigeria and Yemen are on the brink of famine, too. About 1.4 million children are severely acutely malnourished in these countries. This means that people are starving to death. Right now.

The refugee and food crises have swelled for two years due to ongoing extremist attacks and mass displacement in the region. It will only get worse if nothing is done to help. Children, especially those younger than 5, are the most vulnerable, because they need critical nutrients to build strength and immunity against disease.

How did the situation with hunger in Africa get like this?

Conflict and drought remain the two key factors at play in the four at-risk countries. South Sudan, Yemen, and Nigeria are all experiencing internal conflict and violence. Somalia has a long history of conflict and is currently in a third year of drought.

It’s really been the culmination of several disruptive events that have led the affected communities to where they are now. Many of the countries in the region also have struggled with extreme poverty for decades and lack basic infrastructure to help their struggling families.

Instability for farmers in South Sudan, for example, hinders crop production. That limits what is available at the market and raises food prices. Poor families then can’t afford enough food to keep their children healthy, and eventually they need emergency help when they run out of money and food. We’re not talking low funds or food that’s been in our pantry that is well past its expiration. We’re talking actually not having any money or any food at all—nothing. The longer these factors persist, the less families are able to stave off the effects of lost livelihoods or homes.

I hear the word famine a lot, but how do you define famine?

Famine is the absolute worst-case scenario, and not all food crises are actually considered famine.  A community’s food crisis becomes a famine when there’s so little food anywhere that it causes large-scale starvation, malnutrition and death.  To declare famine, three things must all happen:

Why does it seem like there’s always hunger in Africa?

And when 40% of children in sub-Saharan Africa grow up stunted due to chronic malnutrition, they literally lack capacity to learn and contribute to society. Their brains are smaller because they didn’t get enough of the right nutrients at the right time to promote growth. Therefore, their countries lose out on significant leadership and innovation potential, which perpetuates the human capital loss cycle.

Malnutrition develops when your body does not get enough of the vitamins, minerals and 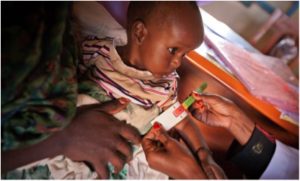 other nutrients it needs to function properly.

Those children who are most at risk are experiencing severe acute malnutrition, known as severe wasting. Their little bodies are beginning to lose the ability to absorb vital nutrients. They’re literally starving to death. And they’re nine times more likely to die than a well-nourished child. These children don’t just need more food. They need the right kind of food—nutrient-rich food treatment, commonly referred to as ready-to-use therapeutic food (RUTF).

Malnutrition is the cause or a contributing factor to 35% of deaths among children younger than 5 globally, according to the World Health Organization.

When will people be able to get back to normal?

There’s no substitute for lifesaving aid in an emergency. But aid organizations also focus on long-term solutions that build resilience so that families and communities have better options when crops fail and streams dry up. Livelihood skills training is one aspect of our current responses that helps families find their own way out of a food crisis.

With long-term development programs in place, hunger crises can often be avoided, and families can maintain independence.

How can I help the hunger crisis in Africa?

There are three primary ways you can help:

Sometimes giving serious thought to the needs and challenges of others helps us to keep our own concerns in proper proportion. As our sister churches in Africa and the Middle East struggle to meet these crises, may we be faithful in our own response.

In Christ’s love and for His sake,